Sew Queer is a series exploring the intersections of sewing and queer identity. To participate, use the hashtag #sewqueer or visit @sewqueer on instagram.

This spring I made a dress. 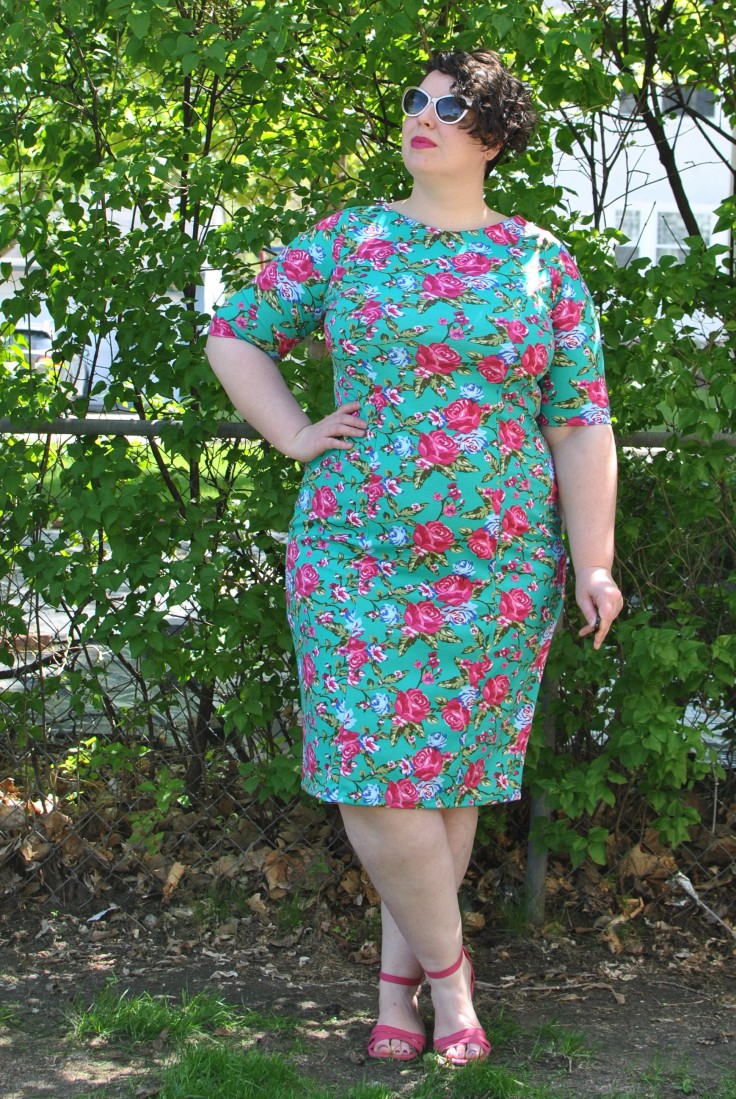 I love this dress! The fabric, a floral ponte, is lush and soft and gorgeous, and I’m proud of my ability to draft a pattern that fit just the way I want it to based off a RTW dress. I like the way it turned out and I like the way it looks on me. It, too, gets a really positive response when I wear it: compliments from strangers on the street and the most likes I ever get on Instagram.

And I feel kind of weird about that.

Not about anyone’s genuine sentiment: I love and adore every comment given by my friends, IRL and extended via the internet. I do love this dress, and I like that other people do too! And yet, there’s something about the overwhelming love for this dress, this particular dress, that makes me feel disingenuous, or at least a little uncomfortable.

On Facebook, a family member said this dress was the best one I made this summer, and a friend said it was quintessentially me; I don’t disagree, not precisely, but if it’s so very me it’s only a part of me. I feel weird because I don’t think I’ve been pushing myself to be more fully expressive of the rest of me, at least not through my sewing.

I call my style femme dandy, which I identify as an androgynous mode of gender expression and self-fashioning concerned not with minimizing the differences between binary-gendered modes of expression but heightening and juxtaposing them. Femme dandy embraces lushness and texture, it power clashes and plays with expectations, it is a way of being and moving in the world that demands attention. Each term, too, calls back to particular historical modes of presentation, each with deep traditions across multiple locations and within many racial and ethnic communities: the foppish, fastidious dandy and the lipsticked and wry femme.

While not all dandies are queer, the dandy style of dress is undoubtedly embraced in many queer circles, both presently and historically. It’s Oscar Wilde in velvet and furs, it’s silk smoking jackets and elaborate cravats.

Femme, on the other hand, as a method of gender expression has its roots almost entirely in queer subcultures (despite its recent cooptation by corporate America, femme isn’t just a synonym for “feminine” and shouldn’t be stripped of its queer roots). Femme is women dancing at the Gateways, it’s the ability to alternately pick up and refuse the markers of femininity, it’s the sly awareness that all gender is a performance, after all, it’s a trickster gender.

This historical continuity carries significance: in picking up these terms, I remind myself that people have lived, loved, and moved through this world in so many different ways, have found joy in expression and power in the things they put on their bodies. I remind myself that there are more ways of being than we see celebrated in our standard histories and our mass media and that queer life is not, has never been, only made up of pain. There is joy to be had — such joy! — and I can wear it on my body, can carry it with me.

So: this spring I made a dress. It’s a dress for pink lipstick and pink shoes, for underpinnings that highlight perfect sculptural curve of my hip, for days to bask in the sunshine-brightness of northern springs when the sun arrives before the flowers. It’s a high femme dress, made intentionally for gender pageantry of the brightest and cheeriest sort.

But if I limit myself to making dresses, to the familiarity of a princess seam and carefully honed attention to the curve from my waist to my hip, I’m missing out on a whole part of expression I so dearly want. Dresses, in many ways, are easier: there are far more patterns available for dresses than for tailored separates, and they are often drafted for someone with proportions somewhat similar to mine. I also have more practice making them and know instinctively which alterations will be likely. But they’re also easier because of how, as I move through the heteronormative world, femme so easily elides into feminine. Dresses feel less challenging at times, like they take less emotional armor to wear.

So with this series, and with my sewing practice moving into 2018, I plan to push myself harder to create a wardrobe that reaches fully across the spectrum of femme dandy. My to-sew list includes three piece suits and carefully tailored shirts and, yes, some dresses as well. I’m terribly excited about this, and I hope you’ll come along with me.