I had set my sewing machine aside for the rest of the summer, ready to focus on other pressing issues in my life (a dissertation chapter; research travel; re-organizing my house after my roommate moves out), but then Seamwork came out with the Laura wrap skirt. I had been thinking about a skirt to take with my on my travel to the UK later this month, and I knew it would be perfect in this raspberry linen/cotton blend I’d been eyeing at SR Harris. I think this is the quickest I’ve ever made a pattern after its release!

Usually, I steer clear of A-line shapes because they rarely are able to accommodate my waist-to-hip ratio without pulling, but I thought the wrap might help. Initially, I graded from a size 18 at the waist to a 22 at the full hip point, nearly corresponding to my measurements. My waist measurement is somewhere between the 16 and 18 in Seamwork/Colette, which is just a slight problem now that they’ve split their sizes — the split is just between the two! In the end, after basting together the skirt panels and trying it on, I took out another 1.5″ from the center back waist, grading it down the center back seam. I also had to skim down the hip curves, as grading a soft curve between sizes left me with too much volume at the high hip — a common problem for me, so I should know better by now!

The skirt ends up with a slight cocoon rather than A-line shape, which I don’t dislike, but I think if I make another, I will bring the side seams in a little more and do a combo sway-back and full-seat adjustment, curving the center back seam, so that the volume is where I need it — over my butt.

Since this is going to be a travel skirt, pockets are a necessity! I added two patch pockets – a large, angled one on the outside panel, adorned with a mother-of-pearl button, and a small, credit-card sized on hidden on the inside. You could probably easily do in-seam pockets as well, but since this is a nice sturdy fabric I liked the look of the patch pockets, which would probably weight down a lighter-weight fabric. 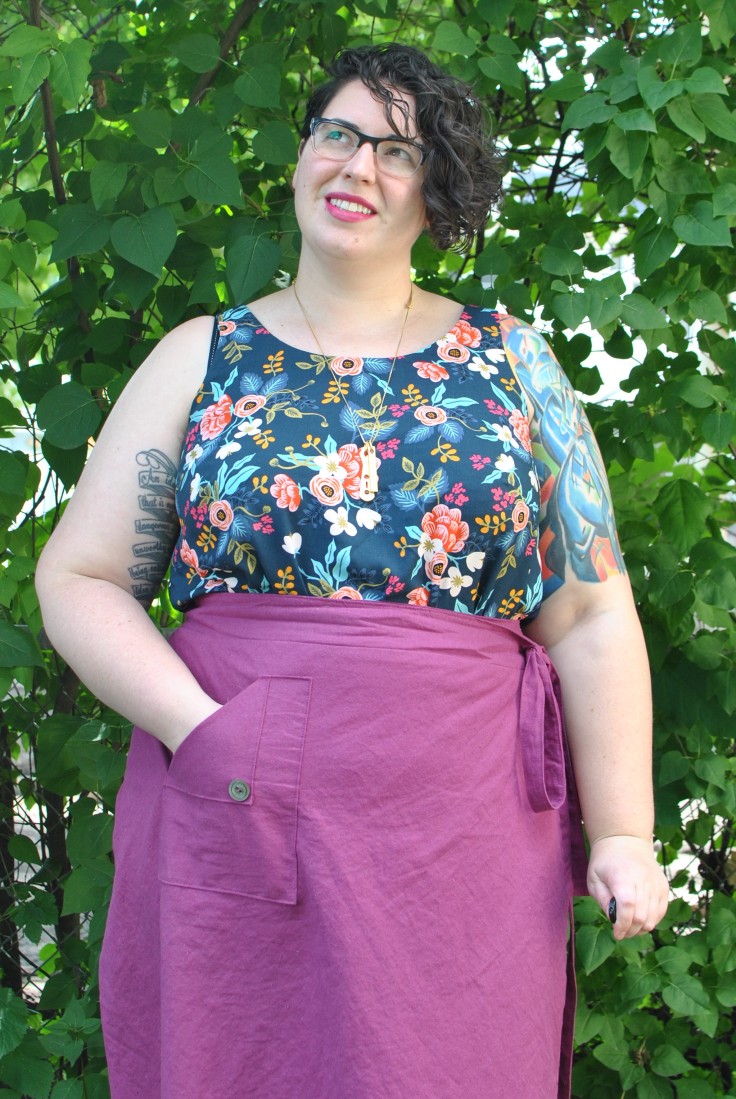 The eagle-eyed among you might notice that this is also a new top! After making my floral culotte jumpsuit, I had just a scant bit of this Rifle Paper Co rayon left, not quite enough to make a top on its own. I paired it with the leftovers of my navy rayon challis to make another Seamwork pattern, the Gretta top. I omitted the shoulder ties and pocket for simplicity and to make it easier to layer under cardigans (a must while traveling or living in Minnesota!) and cut a straight size 18. These two are the first Seamwork/Colette pieces I’ve made since they updated their pattern block, which is now drafted for a DD cup (5″ difference between high bust and full bust), which is pretty close for me (I have about a 6″ difference). So I was really excited to give it a try, and so far so good! The arm holes are just a smidge tight, which has historically been an issue with Seamwork/Colette but is also, more broadly, an issue for me and my gloriously thick upper arms. It might also be due to omitting the shoulder ties in this case, which would have given me a little more leeway in adjusting the tightness. You can see that the armholes also cut in past my bra strap, which is a touch annoying as I don’t own a lot of bras with narrow-set straps, but hardly a deal breaker. The darts are just right, and, though you can’t see it here, the body sweeps really nicely over my stomach and hips. With a few tiny adjustments, this is going to become a repeat make, I have no doubt!

While most of my vacation wardrobe won’t be me-made, I’m excited to take these two pieces with me across the Atlantic!

2 thoughts on “All wrapped up”