I started this project with a scant yard and a half of this vintage blue and rust plaid wool, begging for something wintery but not nearly enough yardage for a full garment on its own. The best thing about winter wear, in my opinion, is the way you can play with textures, so when I decided to pair two fabrics together, I knew I wanted something that would compliment the tightly-woven and slightly flanneled wool. After some daydreaming while perusing the always-tempting shelves at Treadle Yard Goods, I settled on this Kaufman linen/rayon blend, which is navy with just the slightest flecks of lighter greenish blue. The drapey, crinkly texture of linen is just right for my autumnal/wintery vision.

I had originally picked up the 3/8″ copper woodgrain buttons as a possibility for another project, but as soon as they arrived I knew they would be perfect with the plaid fabric, giving it a woodsy vibe. 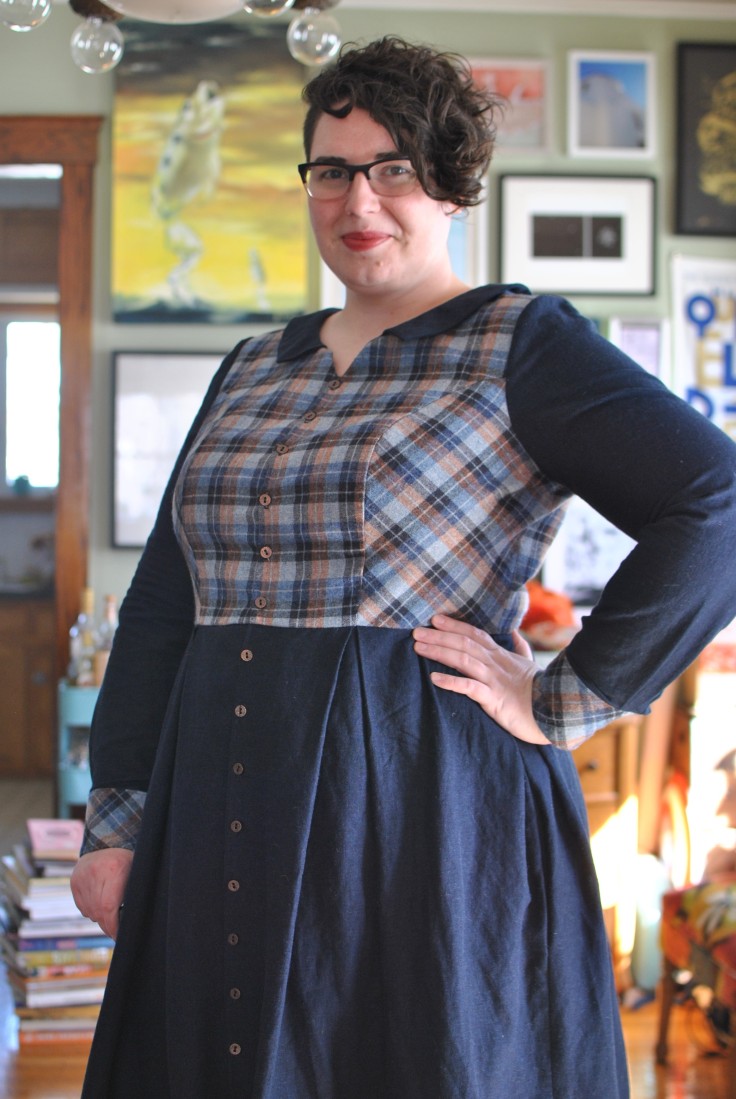 The pattern started with Colette’s Hawthorn, which I had made previously as both a dress and a top, and had a decently-fitted version ready to go. However, to make full use of the plaid, I knew I wanted to switch from the single vertical dart (already a bit tricky for the busty!) to princess seams. Wearing it, I think I could use a smidge more room right across the widest part of my bust, and I might re-draw the princess seam curve to end a little lower if I make another.

I knew I wanted a winter dress, which means long sleeves, so I extended the sleeve pattern, using the sleeve and cuff from my Cashmerette Harrison shirt as a guide. I gave this a bit more volume because I like the look of the double-pleated cuff on a casual garment.

Finally, for the skirt I knew I wanted to repeat the plaid by adding a bias-cut border; for ease, I decided to eschew the flared, curved hem skirt that comes with the pattern in favor of one that would have a straight hem. It was not hard to decide on box pleats! I placed them at the seam lines and inserted small pockets into the pleat fold on either side. 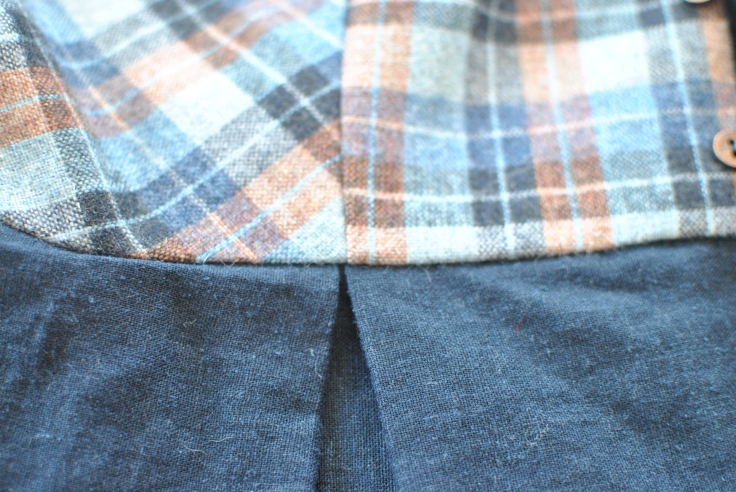 The bodice is lined with cotton voile, which I treated as a mesh between a lining and interlining, assembling both bodices first then basting them together to add the collar, skirt, sleeves, and facing. In retrospect, I wish I had lined the sleeves as well, as the linen is just a little bit rough on the sensitive skin of my upper arms. Nothing that will impede me wearing it, luckily!

I still find pattern matching on a button-front garment a challenge, but I think I did pretty well here! The Hawthorn has a very narrow overlap built in, which I might redraft a little for next time – a tiny bit more overlap in the front would feel more stable. I find the collar on this pattern tends to pop up in the back, too, so here I’ve tacked it down with a short thread chain anchor just at the base of the neck.

Long-sleeve winter dresses are too rare in my wardrobe, and given that I’m in Minnesota are something I’d like to increase! The vibe here feels like a mashup of lumberjack and Sound of Music – you know the dress the poor didn’t want? – in really the best possible way. I predict it will get some good wear in, as while spring has begun on the calendar it has not yet begun in the weather here.